Fun at the Glitter Pot.

Things certainly do sparkle at the Glitter Pot!
I had such a great day at the Glitter Pot today! I arrived nice and early, just so I would have a chance to have a looky-looky around. I visited the Gllitter Pot a couple of years ago, and it was a gem of a shop then, but since they have expended the shop by about two thirds and now - well, it's the Crown Jewels!
My demo table was in between kay Carley and Stamping Caz! Wow! What an honour. After I'd set up I had a good look around and I couldn't wait until I could get out my purse and spend, spend, spend! Then Paula Pascual arrived, and it was really lovely to see her again. Julie Hickey was also demoing at the event, and she was truely an inspiration to me when I was new to crafting and now, so it was lovely to be working along side one of my crafting idols.
The day was very busy, and it was lovely to have a good old natter about all things crafty and hopefully pass on some tips and little tricks. I was demoing the Daisy and Dandelion Stamps which are exclusive to the Glitter Pot, and they proved very popular! 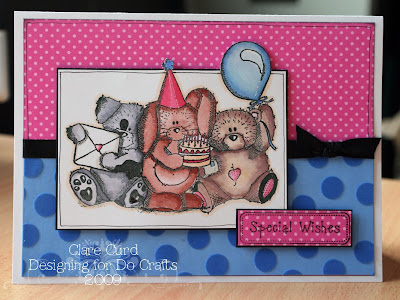 This is one of the cards that I created using the exclusive stamps. I've simply masked the centre rabbit image, and then stamped dandelion and bubbles to overlap. When the mask is removed it appears that the are standing behind the rabbit. As a Meerkat would say... "Simples"!
The paper and velvet spotted cardstock is Doodlebug.
Well, better get back to watching Dodgeball, and then get some shut eye for tomorrows demos. Thanks for visiting, have a great Sunday and Bank Holiday!
love, Clare x
Posted by Clare on 22:14
Email ThisBlogThis!Share to TwitterShare to FacebookShare to Pinterest
Labels: Cards, Daisy and Dandelion, demo

Clare i adore this range and your card is just beautiful, I went over to the glitter pot and ordered the whole new set of this range out this month , haven't had time to play with it. As we are really busy in the house, Can't wait to have fun with it though.

Sounds like a suoer day at the Glitter Pot wish i lived nearer :(

Fabulous demo I love the cards, such beautiful colouring. Thanks for bag tutorial. Thank you Sarah x

It was fabulous to meet you in RL and hope you have a lovely time in Cornwall.
luv
Debby

Hi Clare
I love your card, the images look great together!
Hugs Lynsey:)

oooohhhh I so wish I lived near the Glitter Pot, loved shopping online at their store, sounds like you had a fab day and met some wonderful girlies.

Love the images on this card, what a cutie xx vicki xx

clare i know your busy , but i awarded you blog awards cause your blog does make me smile , If you have time pop over to my blog and get them.

It was great to finally meet you on the Sunday and your demo was lovely too, Sam x