October..OCTOBER! Where does the time go - I really don't think I will ever get the grip of keeping this thing up to date, so it's a waste of words to say I will. I really do want to - every now and again I get a pang of guilt when I think of my poor old blog all unused and dusty, when a few years ago it was full of fun and life...but that's the thing - life {i.e work} gets in the way and before you know it I'm 89 and am tormenting the care home residents with a hot glue gun.

Well, I thought I should update you {if you're interested of course, if not scroll down to the photos - like you do when you go to look at biographies in Waterstone's and flick straight to the funny photos about the middle of the book}.

Am Dram {AKA the Southbank players} is going well. We're performing our Panto 'Strictly Cinderella' on the 13th, 14th and 15 January, with a matinee performance at 2.30pm on the 15th. I play Fairy Liquid, the Fairy Godmother - and you may not recognise me, {well, that's the idea anyway} but we'll see. I really wish I had joined years ago, we have such a good time, and it's something different to what I usually do day to day. I mean, where else can you dress up as a fairy and have no one laugh at you {until you crack a punch line of course!}. The people there have become such good friends. I'll hopefully have lots of publicity shots from tonight, so I'll be sure to post them soon.

I've been to a couple of parties over the Christmas period, but not as many as I would  like - and some have definitely been more eventful than others! I feel ready now to tell you the story of how I nearly killed myself on a cold and icy night about 9 nights ago. Well, I was ready then, but I couldn't actually move my arms from whiplash. I hope you will allow me the cathartic release that I get when I tell the story. WARNING: this is going to be a LONG one!

It all started at a Christmas party for the people from Drama Group at Liz's house. I'd offered a lift home to someone, and the party continued to just past midnight. As we were leaving, Liz made the very big mistake of saying 'Drive Carefully'. I mean has she not seen the movies - any line like that and something is bound to go wrong. Seriously. In fact come to think about it - I blame the whole incident on her uttering those words. JOKE!

SO, are you still with me? I dropped off my passenger, wished them Happy Christmas and bid to see them in the New Year. It had been snowing lightly on and off during the day, and also a few flakes had come down in the evening too. I drove off with a smile on my face, knowing Christmas was on the way and soon I would be tucked up in my warm bed. I didn't have the CD player on, and as far as I was concerned I was home and dry....

Then I took one of the corners and the back end of the car started to flick out. So I tried to correct it, and as I did {and this is all assumption, cos it happened so quickly} the front passenger tyre hit the curb and the over correction of the skid left me heading for the bushes and field on the opposite side of the road. I just thought I would hit the bush and drive bumpily into the field until the rough ground brought the car to a halt. How wrong could I be.

I narrowly missed a road sign, by about a millimetre, I'm not joking, then as soon as the car hit the curb and bush the steering wheel was ripped from my hands and I was helpless to steer the car. Then for the bit I didn't expect. There was a drainage ditch just after the bushes, but before the field, a ditch about 4 foot deep. I know this as when I was later stood in it trying to get away from the car, my head was just poking over the top. I am five foot one. Go figure. Please excuse me if the next bit is a bit blurry, cos it was/is to me too. It all happened so fast. All I know is there was A LOT of horrible noise, smashing windows and the car just seemed to spin and flip and I knew I was going upside down, i just knew it, and call it instinct but I put my hands onto the top of the car to try and stop the roof completely caving in and crushing me. Silly I know, but at the time it seemed so logical. I remember the car coming to a complete stop, and me just screaming, screaming, screaming. Then I remember thinking 'I'm still alive', and I developed the weirdest habit pretty fast. Saying the same thing over and over again. Like 'I'm OK, I'm OK, I'm OK' about a hundred times, I suppose trying to convince myself.

Still pinned to the roof of my car by my trusty seat belt, I turned the engine off {can you believe it was still going - I think any way} and just sat there with my hair all dangling down for a few seconds whilst I rooted though my bag looking for my phone, whilst saying 'phone, phone, phone' over and over again. Then it dawned on me. I was say locked into a car which had just been flipped onto it's roof and could explode at any time. So I did what any normal, rational person would do and started screaming 'HELP, HELP!'. Now if you knew the road I was on you would of course have slapped me around the face int he hope of knocking some sense into me as at half past midnight on the 23rd December this road is deserted. Indeed at half past midday this road is deserted. SO I stopped that, and did what any rational woman would do. I started panicking. Then I stopped that and did the most unusual thing for me. I started being logical. I released the seat belt, which of course sent me falling to the ceiling {which was now the floor} of the car, windscreen and all, and this came as a bit of a shock for me, I didn't think I was up that high! And now for what my friend thinks is the funniest part of the story. I smacked my head on the steering wheel as I fell. I know, it's absolutely hilarious. Excuse me Peter for not laughing.
Luckily, the passenger window had smashed when the car rolled and I was able to crawl out, but I was somehow still attached to the seat belt. So I knelt there {which I where I think I cut my knees on the glass,} frantically riffling through my bag looking for my phone. I just couldn't find it. I knew there was only three options.I was rushing too much,  it had fallen out of my bag in the car, or it was sat warm and unaware of how much it was needed in Liz's house. Anyway, I eventually freed myself from the seat belt, and once a safe distance from the car, I looked more carefully in my bag. There were scripts, Christmas cards, even a chupa chup lolly, but no phone. No worries I thought, I'll just suck on my chupa chup lolly until I either freeze or bleed to death. JOKE. I knew I had to go a rooting in the debris of my car. Deep joy, what if it explodes as I'm walking up to it and I turn into a stunt double for Velma from Scooby Doo {friends have said in the past I bear a passing resemblance. Thanks, thanks a lot - she's the geeky one with the long socks.}

So, every CD I touched I uttered 'Thank God', thinking it was my phone, until the Thank Gods turned into tears knowing I couldn't find it. And that I was going to have to freeze my toes off {which were wearing the most inappropriate shoes for walking in snow} walking the mile or so into Barrow to knock on the first door I came to. Then I did what I should have done in the first place. I checked my pocket, and it was there. I kissed my phone, I actually kissed my phone. I love my phone. and it worked!

So, who did I call? 999, police ambulance, fire service, coastguard? Bruce and Tess, Davina or Dermot? No, of course not -I called my friend Peter, whom I had just dropped off. Well, it felt as though I had just dropped him off but he'd probably had a three course meal, a shower, watched an episode of Holby City and was tucked up with a glass of cognac by the time the phone rang. Cool as a cucumber, he answered the phone whilst I screamed that I'd crashed my car and that it was upside down in a field, and that David was going to kill me, and could he come? Now Peter is a police officer {hence why I rang him} and used to dealing with these incidents he said "Okay, that's fine", as you can imagine I felt like calmly saying, no it's not fine, my car is upside down in a field with all the windows smashed." I refrained. But bless him, he came on his bicycle as he'd had a drink {hence me giving him a lift.} I can never thank him enough for coming to help me. I can't tell you how happy I was so see his little flashing light getting closer and closer.

Anyway, to cut a long story short {TOO LATE!} Peter secured my car, checked that I didn't have any lasting damage, then Liz's husband Chris came to pick me up and take me home. Now we are just waiting for the assessors to tell us the car is a write off so I can get another car. But, I would like to take this opportunity to thank Peter, Liz and Chris for coming to help me when I needed a friend. And to all my other friends who sent well wishes and came to visit me. Life is all about friends.

Here's some pictures taken the day after the accident. Or as Peter likes to put it 'the result of some pretty crap driving.' You always say the right thing Peter. 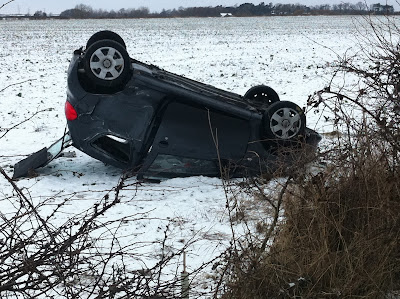 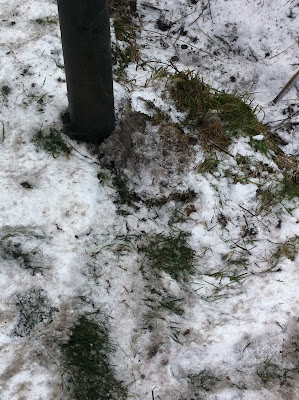 This just shows how close my car was to taking out the sign, which Peter reliably and cheerfully informed me would either have split my car in half, pushed the engine into the foot well of the car, trapping my lower extremities, or turned into a dangerous weapon inside the car, causing all sorts of mayhem. Everyone should have a friend like Peter. No, seriously - he's a star. 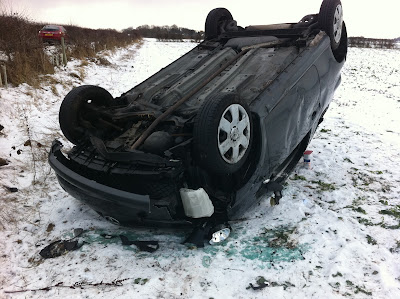 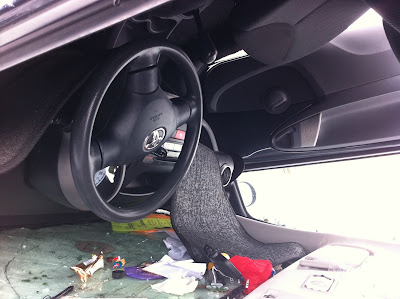 I really should take care of my CD's 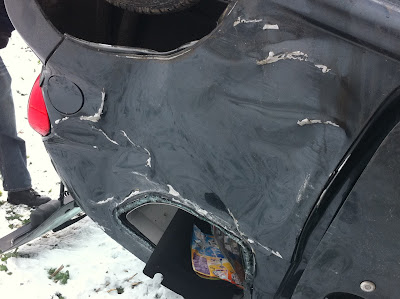 Mmm, that'll need a bit of beating out!

Anyway, thanks for allowing me to get that off my chest. I can see the funny side now, but I was not laughing at the time.

Love, Clare x
Posted by Clare on 12:35 31 comments
Email ThisBlogThis!Share to TwitterShare to FacebookShare to Pinterest