Blogs are great for many things...those things you already know without me having to fill you in. However, one thing that they are good for, but which I don't use mine for that often is letting all your inner feelings out about something that affects your whole being. Hope you don't mind me using my blog for this purpose just this once. I promise normal cheerful service will be resumed soon after! 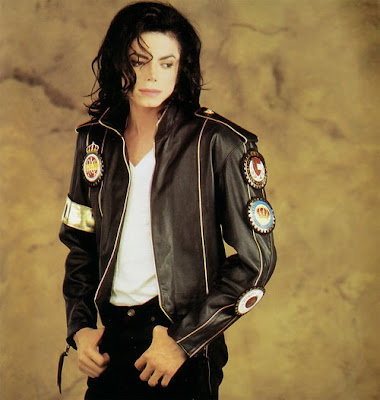 It's really hard to say how I feel right now...right at this moment in time as I type this. I suppose the right way to put it is a mash of emotions - shocked, but not shocked, distraught yet together. For someone I 'know', someone who I grew up being completely infactuated with has gone to hopefully a better place. However, I didn't really know him, so why do I feel such a loss?

Micheal Jackson was such a great influence on my life from when I was about 10 years old, and from that day when I first bought Thriller with my birthday money my life has never been the same. To say that I was infactuated by him is putting it mildly. I was always listened to his music, bought all the posters (one of my favourite is the picture above), scarves, even a white glove. I Wore the white plasters, and the black arm band, sewed the patches onto my jacket, cut out his picture or any article about him from magazines and put it into a scrapbook. I also suscribed to 'The King magazine' - all about Michael, written by his fans, for his fans. I had more arguments than I can remember defending his name with the others at school that just didn't like him. Whenever a new single came out, I just HAD to buy it in 7", 12" and special edition 7" and 12" formats. My mum used to think I was mad! She said if I spent as much time on my school work as I did on Michael Jackson I'd be sorted. he really was my whole world.

When I was 17, Michael was touring with the Dangerous World Tour and I couldn't wait to see him, for real. I went with my best friend, Anne Wood, and I remember us practicing running as fast as we could to make sure that we would get to the front of the crowd! As I reminice now, it seems so silly, but at the time it made perfect sense. I saved and saved for that concert, and bought every t-shirt, poster and souvenir catalogue going to declare my love for the King of Pop. The atmosphere was electric, and I remember when it was time for the concert to start, and the music started, I cried like a baby, and nearly fainted. I didn't thank goodness, as Anne said " get a grip or you'll miss him coming on!" It was without doubt (up to that point in my life anyway) the best three hours of my life.

Of course, as I matured, went to University and subsequently got a job, my infactuation for Michael waned somewhat, but I still bought his CD's and was lucky enough to go again to see him in the 'Blood is on the Dancefloor' Tour. He was still as spellbingingly magical as always.

When 'those' allergations came out, I stood by him like any good friend should. I (again) got into heated discussions with family and friends, and in the end he was found innocent. When some of my friends and family, along with the media were on a witch hunt out for his blood, I listened to the edidence and yes, I think he was naive, and badly advised, but I still believed in him. I don't think he every really recovered after that.

Now he is gone, and I feel just as I did back then, loving him so much. My feelings seem so irrational, but then he was a huge part of my life. He got me though some bad times, bullying at school and the like, but when I got home his songs were always there. Can you mourn someone you never really 'knew'. In my opinion I think so.

So back then, when he was out of favour with the press, after the Martin Bashir Interview and the trial, the media still in my opinion treated him like he had been found guilty of those terrible things. And now...well, now they can't wait to put his image on the front of thir papers and tell stories about what they found at his postmortem cancerning his cosmetic surgery, his hair - on the cover of one paper they even boast about an 'exclusive' last picture of Michael in the ambulance, intubated and probably gone. How callous and severely distasteful does someone have to be to stoop so low as to even think about taking a picture of a man in his final minutes of life? SHAME ON THEM. As far as I'm concerned they are the lowest of the low, and if they are a member of the emergency services as I suspect, they should be struck off for such a terrible betrayal of a man's right to privacy and dignity. Please, let's just stop this media circus that has surrounded him all his life and treat him with some respect.

I plan to remember him as I have always done. A genius, an extremely talented, kind individual. I will miss you every day Michael, but your music and your lagacy with be with me forever. Thanks for some great memories. This video says it all - Gone Too Soon.

Arrived back from Oz a few days ago, and so far I haven't had a minute to draw breath, never mind upload my photos onto my computer to share with you. I'm soooo sorry and I'm dying to share my pics on here (and I will) but I'm a little pre-occupied with prep and planning for QVC. 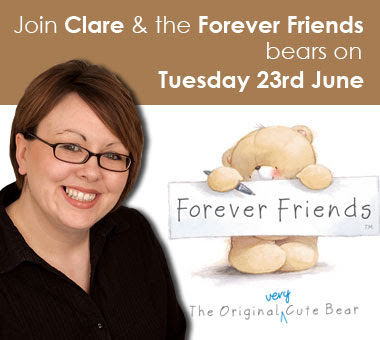 I'm on there on Tuesday morning (23rd June) at Midnight, and then at numerous times throughout the day, so you don't have to be Derek Acorah to work out what that means do you? also I've taken this piccy from the Do Crafts website which will give you a clue to what we'll be demoing, need I say more?

I'm so excited, I'm practically buzzing, but there is so much still to be done. I went to London Tarn yesterday for a rehearsal and some promo filming, which is all very exciting, but tiring, especially spending 7 hours of a day too-ing and fro-ing on a train. I also had to book a hotel for two nights too, no mean feat when I realised that Wimbledon starts on Monday too and everywhere is booked up. Ah well, Lizzy Windsor has a few spare rooms in her house and she says I can have one of those, as long as I don't mind sharing with the corgis and trotting them for a walk when changing of the guards finished.

Well, better get on!

G'Day from Down Under!

Well, here I am! I arrived safely, although mega tired! I don't sleep on planes and this time was no exception! I tried my best - but it was no good. I got a taxi to the hotel (it was 7.30 am on a Saturday morning after I had set off on Thursday evening at 5.30pm - how mad is that?), and we were nearly involved in a car accident, we were two behind the car that must have skidded in the rain and hit a barrier. Looked right a right off to me. Hope they're okay, as the taxi driver reversed out of the traffic jam and carried on his way, so I don't know!

I've arrived three days earlier than Phil and Richard (My colleagues) in order to do a little sight seeing. After checking in, I went to have a look around Sydney Harbour (my hotel is literally on the harbour front - I mean, you can see the Sydney Harbour Bridge from my hotel room - how cool is that!) and it really is stunning - the Opera House and Bridge in it's full glory! Got LOADS of pictures which I'm sure you will be begging me to stop showing you when I get home. Found a little market in the Rocks (the oldest part of Sydney and really the Birthplace of Modern Australia, as this is where the first settlers landed back in...along time ago.) and bought myself a gorgeous solid silver ring as a way of a memento of my trip. Went back to my hotel room and thought I'd have a little nap... when I woke up it was 5.00 on my watch, but I didn't know which 5.00 - am or pm? It was just getting dark - or just getting light, and I was completely confused 'till about an hour later when I ventured into the lift and the Date and time was displayed. Jet lag really does do funny things to you - I really would have believed you if you told me it was 5am on Sunday morning - or 5pm Sunday night, as it felt like I had slept forever!

The next day I went to Sydney Wildlife World, and did something I have always wanted to do... have my picture taken with a Koala! I've had them put onto a disc so I can put them on here when I get home too - can't wait to show you - they are sooo cute! Also spent time with Kookaburra's, Kangaroos and Possums, plus load of other animals from all over Australia. They are kept in surroundings which reflect their natural environment, and the enclosures were pretty big too, so they got my seal of approval.

This morning I went to get a closer look at the Sydney Opera House, and of course took some pictures in colour and black and white for some good ol' scrapbook pages! Also took the ferry to Darling harbour and walked back. I feel like I've walked for England this last two days!

Richard and Phil arrive tomorrow, and it will be great to see them and talk to a familiar face. Everyone is very friendly here, but it's nice to share an experience with someone you know isn't it? Then it will be up to Brisbane on Wednesday for work, and I'm really looking forward to it! Apart from a bit of colouring on the plane, I haven't done any craftig since Wednesday last week and I'm craving a bit of stamping, cutting and sticking!

Anyhoo, I'd better get gone and get ready for dinner... see you all later - next time with pictures!