News about the Giveaway

Well as promised, I thought I would let you know what you could be winning in the next few weeks!


PLEASE NOTE, THE GIVEAWAY IS NOT LIVE AS YET, THIS IS JUST FOR YOUR INFORMATION. 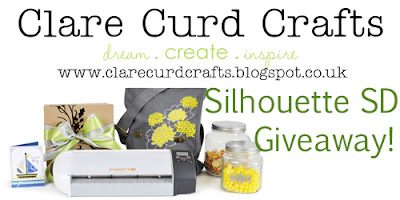 Yes, that's right...I'm going to be giving away one wonderful Silhouette SD machine, complete with all leads, software and a $25 silhouette online store card to add to the 50 shapes already included in with the machine.

More details will be posted on the grand launch date of 1st February. One of the requests is that you follow this blog and the Clare Curd Crafts Boutique Facebook page. Why not do that now, then that's two out of the way already!

Good luck and see you soon!

Posted by Clare on 20:00 8 comments
Email ThisBlogThis!Share to TwitterShare to FacebookShare to Pinterest

Can you believe it's nearly been a year since I posted on here? I sometimes look at my blog, then if I had a mirror at the precise moment in time I would look back at myself in disgust, ashamed I've left it so long. Truly though A LOT has happened within that year. I don't really know why but I have felt for  some time that I should tell you about it, and there hasn't been a right time...until now.

well, I'm not the first, and I know I'm definitely not going to be the last (sadly). My husband David and I separated in May. It was my decision, and believe me, not one that I took lightly. To save people's feelings (as I know that David, and my family may read my blog) I will not go into the whole ins and outs, but things were just not right and either I could sit back and let it consume me, or I could grab the bull by the horns and do something about it. and that's what I did. I know that some will think that when you get married you're in it for the long haul, and I respect those people's opinion, but that wasn't for me.

And it's not like I decided on the toss of a coin or on the spur of the moment. I knew it was a massive decision which made it even more difficult. Not only would it affect mine and David's life, but also that of my family and most importantly, Joseph.

If i thought telling David was hard, telling Joseph was the hardest thing I've ever had to do in my life. How do you make a 7 year old understand that you are not and would never leave them, and that they would still want for nothing, yet expect them to believe that everything would stay the same? I'm crying now when I remember that awful day. I try not to think about it normally as it's too upsetting. As with anything time eases things and Joseph is now as happy as he ever was, but that day I knew he was breaking his heart.

And now 7 months on things are just getting a little easier. Just because it was me who made the decision doesn't mean that I wasn't wholly upset by the experience. I live in a village about 5 miles from my previous home, in a lovely 3 bedroomed apartment, with a fantastic craft room and amazing neighbours whom I've had the pleasure of getting to know though all of this. I have lost friends unfortunately,but gained some too, and I think that things like this shows who really were friends in the first place. If this has cemented one thought in my mind, never jusdge another until you've walked in their shoes.  And through all of this my best friend Sheila has stood by me like a rock. No one could ask for a better friend.

So now you know; that's the reason for my hiatus and the delay in setting up my online craft boutique.But I'm getting there, David and I are still friends and I'm thankful for that. He was my friend first and foremost and hope he always will be. And I hope Joseph knows I love him forever and with all my heart.

Posted by Clare on 00:41 13 comments
Email ThisBlogThis!Share to TwitterShare to FacebookShare to Pinterest