The First Lick is the Sweetest...

I forgot to share these pictures with you from the weekend. We went as a family to the annual Barton Beer Festival. The weather was gorgeous, so we decided to go in the early afternoon. 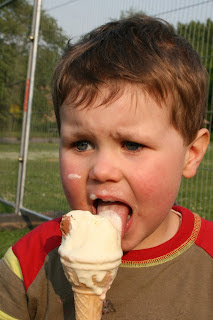 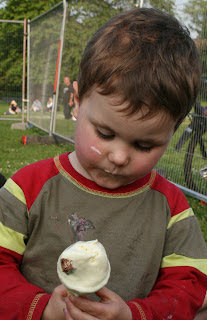 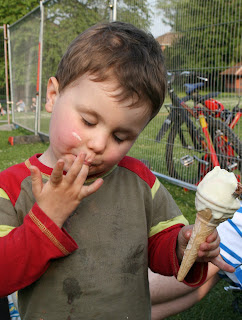 Now, these pictures mean a lot to us, as up until February of this year, Joseph was diagnosed with a lactose and milk protein intolerance and therefore was unable to have dairy products, and consequently anything containing whey powder or lactose. Would you believe that even some tomato ketchups contain milk! Of course, we were very lucky that Joe didn’t have anything more serious, as all it meant was we had to avoid the foodstuff.

I really shouldn’t be complaining as there are many children more seriously affected by the intolerance, but eating out and staying away from home was a nightmare, except for at Disney World. Here, they bent over backward to help us, and would cook things especially for Joe so he could share the same experiences as we. For example, the chef of a self-service eatery came out to us one day, and said he could make Joseph a Mickey Mouse shaped pancake with Soya milk! How cool is that! Compare this to England where in a hotel (that was part of a large chain). The chef commented that ‘he wouldn’t like to say whether milk was present in any of the foods that provided’! I know that they couldn’t guarantee any transference of milk, but you would think they could have informed me which food items contained milk, as surely they would have an ingredients listing. Combine this with the fact that milk protein intolerance is the most common children’s allergy, and it’s pathetic. Anyway, that’s another story.

So, in February he had a milk intolerance test (as 90% of children over the age of 5 grow out of the intolerance), and lo and behold, Joseph had outgrown it early!! This is the FIRST ‘99 cone that Joseph has ever had, and it looks as though it was worth the wait! I love you ,Chuckles! 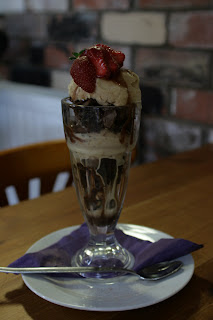 Talking about ice cream, look what landed on my table in a gorgeous little cafe yesterday! It would have been rude to say no, and anyway, a figure like mine doesn't keep itself, you know. He he!!

Posted by Clare on 09:52
Email ThisBlogThis!Share to TwitterShare to FacebookShare to Pinterest
Labels: Joseph

He looks like he really enjoyed that! And yours? was it nice?

Carley had a milk intolerance too from being born. Boy, I can still remember the screaming until she got diagnosed at 6months old!!!!

All the best to Joe. x

Oh Clare that is brilliant news! Joe looks sooooo happy! Jake adores ice-creams, the ice-cream man who comes down our street always comes before tea-time though! How annoying!

Clare, these are great pictures and look at sweet little Joseph just loving that ice-cream! He's a cutie x