Behind the Scenes at Do Crafts!

I should be excited really. David picked the new car up yesterday (a Toyota Aygo), but for some reason I’m unnaturally subdued and generally nonchalant about it. I think the lack of sleep and interaction with life has done me in big style. Normally I don’t get to see that many people in one week when I’m at home, but it was great to see my friends in the office again. Normally, there is so much to squeeze in when I go down to the office, but at least this time things were a little more relaxed as I did have twice as long as I normally do.

Now I’m doing the video of the week amongst everything else, I’ll be going down more often, and that can only be a good thing. We filmed three videos whist I’ve been down, and they are a lot more involved than they seem, although I’ve really enjoyed doing them. Dan (the videographer) and I had such a laugh, making up scenarios of different scenes we could film. I think most of those will just play in our head though!
Then on Wednesday night I was invited for dinner to Lou’s house (you know the one, along with Dan had me walking till my ankles were dropping off.) We had a gorgeous beef casserole, along with mashed potatoes and homemade chocolate mousse, and we talked till our jaws were nearly hanging off too!
Tuesday I got to see the exciting new products for January and March release in the flesh. Until a few weeks before, products are usually mock ups, whilst waiting for delivery of the real thing. Most products for January have been delivered now, and are waiting to fulfil their destiny of being used by you crafting junkies. I managed to get some sneaky snaps whilst backs were turned, ‘cos I knew you would like to see them too. I will post them seperately another day.
I also took some pictures of the people that make Do Crafts head office such a great place to visit, along with some of the key areas around the place. I’ll explain each one as we go along. If you want to see any of the photos in greater detail, just click on them. 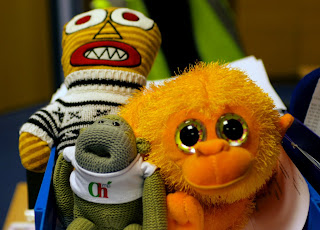 This is some of the Customer service Girls. No - Not really, but they are the mascots that cheer them on. Aren't they the cutest things, especially Dawn's wide eyed monkey! 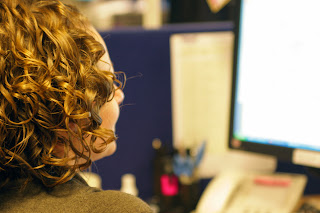 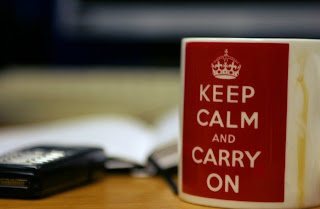 This is Erica Martin. She is one of the product designers for Papermania, amongst other things. She is also the designer and creator of the new Daisy and Dandelion Collection, due to hit craft shops in March 2009. I have been very lucky to get my hands on some of the stamps in this range, and I can’t wait to get using them just as soon as I have a spare minute. She has also worked alongside me on my own range of products….Oh, have I said too much…I think I’ll leave it there for the time being! She’s a lovely girl who’s always so calm and cheerful even when the going gets tough. 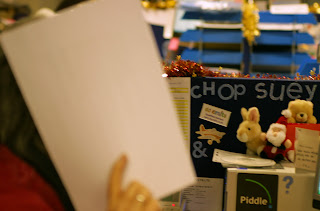 This is Sue, probably one of the nicest people at Do Crafts, and more affectionately known as Chop Suey to her friends. Now it’s not that staff at Do Crafts have signed the official secrets act, and like the MI5 are unable to reveal their true identity, it’s just that they are incredibly shy. Ha! Suey, you’ve still been on my blog – even if behind a piece of paper! Sue’s job is to keep everything ticking along smoothly for the likes of the sales managers and me, and like a machine, everything would grind to a halt if Sue wasn’t oiling the joints. 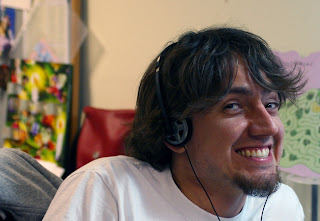 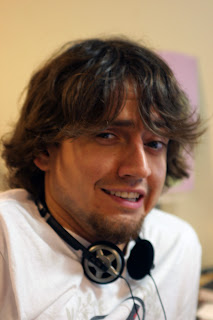 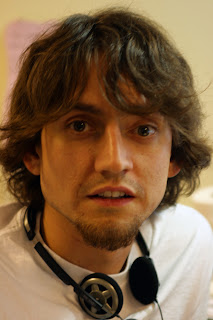 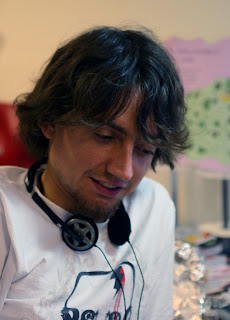 Shyness is not the way to describe our Dan (or Danny Boy) as I like to call him. Here we can see the many faces of Dan the Man, and now you can see why I have such a laugh with him. I’m surprised that these pictures are not more blurred, we were laughing so much! N.B the toilet roll is on his desk because he had a cold (not my choice of nasal wiping material, but there we are.) 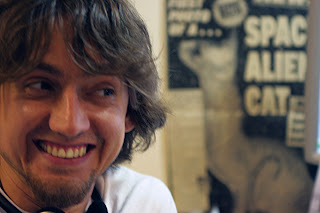 I particularly love this picture of Dan and his Alien cat poster – with that cheesy grin - on Dan, not the cat. 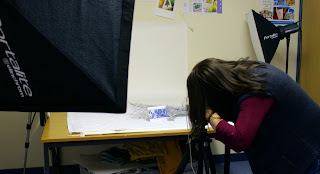 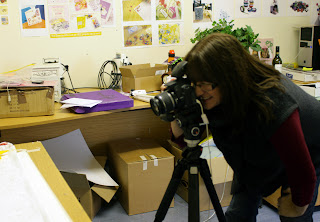 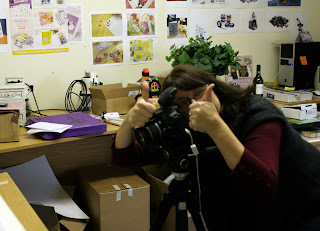 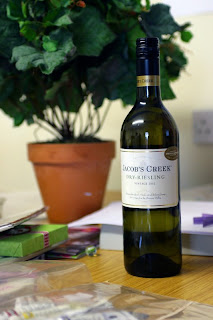 Finally, we have Lou – Lovely Lou. I thought you might like to see how the cards on the website get there, and Lou takes all the photographs of cards, scrapbook pages, ATC’s and products, this is no mean feat. I gate crashed her taking some photos of one of my cards for the Advent Calendar (I think), and these things can take time. Sometimes, depending on the card, the background props needed etc, getting a photograph from set up to the end of editing can take three or four hours. I think it’s a shame that not enough credit goes to Lou and Dan for their hard work, as they really bring out the best features of a project and make it look amazing! Thanks Lou and Dan for all you do, and spare a thought for them when you next look at the photographs on the Do Crafts website! By the way, the bottle of wine isn’t for when things get tough, so Lou told me, it’s for a prop and that’s the story Lou is sticking to. It’s still untouched and it’s been there for two years! 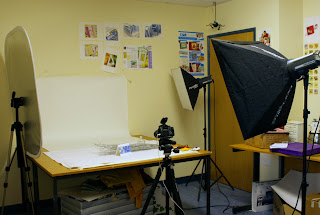 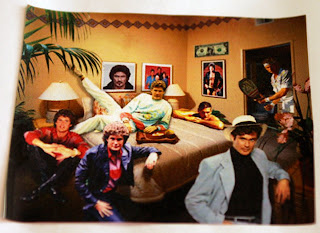 Then we have some of the areas of the offices. This is the photo room, it always makes me smile as this is where Lou takes her photographs and they still have the sign on the door from when they based down here all the time. Not really sure why David Hasselhoff has such a major role in the sign. 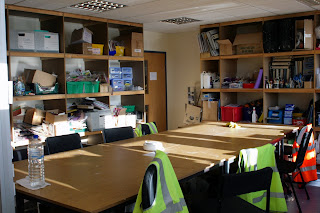 Then there’s the craft room which is amazingly tidy, thanks to Jenny Pearce. It is unrecognisable from last time I came down! It’s such a great size with plenty of desk room to really spread out. 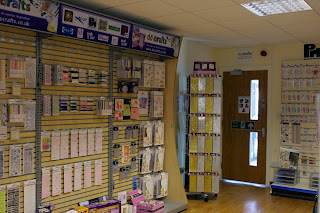 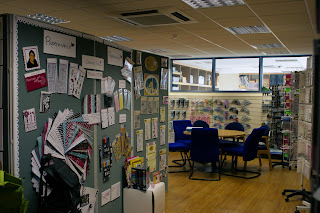 Finally we have the Concept store, which is like a mock up of a craft shop, laid out with current and new products for staff and store owners to come and view. If you look closely at the products on the boards, you might get some sneak peeks of what’s planned and why I’m sooo excited!
Well, I think that’s about all for now!
Love, Clare x
Posted by Clare on 20:57
Email ThisBlogThis!Share to TwitterShare to FacebookShare to Pinterest
Labels: Do crafts

Oh how fab Clare I bet you had a great time

I especially love the pic of the customer service girls :D x

ooohh you lucky devil, I needed those pics to be more three dimensional..espesh in the craft room just so I could go and pick things up and be nosey..lol..

Sounds like you've had a hoot!..maybe you are just tired out to get excited about your new car...I'm feeling a bit like that also.
The trouble with me is...I never say NO..ha ha..well within reason you understand so have a few deadlines to hit before Christmas then I will deffo be joining in with the challenges again.x
Ooohh..you tease, I heard you sneak something in about your own products and then change the subject..lol...I will wait patiently..(NOT) for that to unfold.xxx