Have Yourself a Merry Little Christmas!

Oh, it's great to be here again! I've missed typing my daily comings and goings, so I'm sorry but you're in for a long one here!

Sheila and I travelled down to London on Monday for QVC, and I don't really know why but it took us about 7 hours to get to the hotel! The traffic was bad going into London, and I think we came across an accident as well, but the most infuriating thing was that David's Dad's SatNav couldn't find Westminster Abbey! I mean, it's not like it's just been built is it? We started off trying the address of the hotel, then the postcode, then the shortened postcode, then places of interest around the hotel such at The Tate Gallery (on the same street) and the Houses of Parliament. No Luck.

Then once we'd arrived at the hotel, checked in and had a cup of tea, we set off to the QVC studios only to find that it didn't know where that was either. The same set of circumstances happened again! In the end we had to go into a petrol station and ask. How mad is that!

We had loads of time though, and were getting all set up from about 6pm. Again, I loved doing the show, although I was shattered seeing as I had been up since 6 am, and we didn't crawl into bed until 2am. To top it all off, the bar was closed when we got back - so we couldn't even have a night cap!

It was lovely to see Dawn, JJ, and the lovely, lovely Leonie again (waving vigourously!), and it sounded as though they had had a good but busy day. I think the next time I will be down will be in February, so it will be great to see them again soon.

Then the next day, Shaila and I hit Oxford Street for a spot of retail therapy, rushing around trying to catch up on Christmas shopping before going the see Wicked! Sheila had bought me the tickets for my birthday, and I have the soundtrack and absolutely love this musical, so I was near to hysteria by the time the orchestra started. When we first walked in, we were taken aback by the stage set. 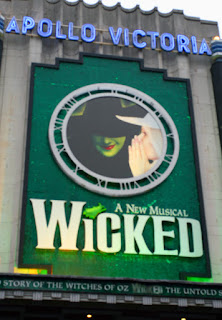 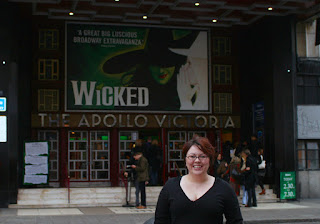 The show was amazing the acting and singing was spectacular and brought a few tears to my eyes. Even Sheila said that she was thinking of buying the CD as we left. I told you she'd be connverted! I treated myself to a t-shirt, a keyring, a mug, a programme and the most fantastic umbrella you've ever seen. I'll post a piccy of it as soon as I can!

Then Christmas Eve was here before I could blink. Joseph scattered magic reindeer food outside on Nannan and Grandad's garden and left milk and a carrot for Rudolf and whisky and battenburg cake for Santa (Joseph thought he might fancy something different to a mince pie!), then he went to bed and slept until 8 am! His favourite presents were his Dalek head (he hadn't stopped asking about this since October, even though he's never seen Doctor Who), a Go Kart, which was a complete surprise from Nannan and Grandad, and his big city garage from his Nannie and Grandad. I was also very happy with my Wii fit, so by the next time you see me, a near miracle will have occured and I will be a size 6. Ha ha. 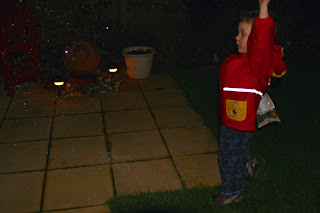 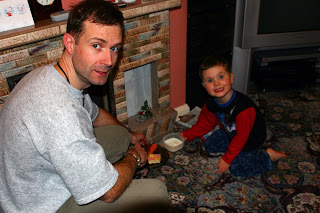 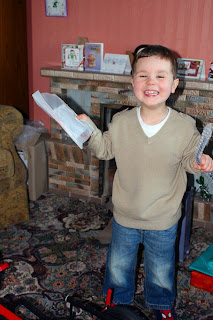 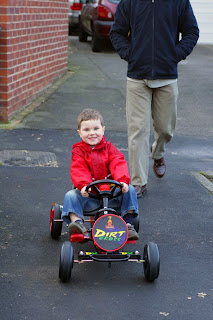 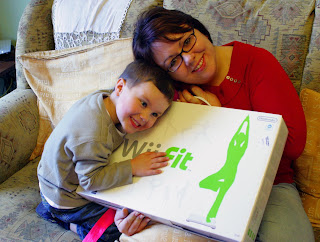 I just want to tell you a really funny thing that happened on Christmas Day night. as my mum and dad were leaving after having tea at David's mum and Dad's everyone was trying to give a kiss and a hug to Joe, and he still had his Dalek head on. As he wouldn't take it off, he just said to everyone "Kiss my Knob", meaning the eye stalk on the Darlek. laugh? I nearly wet myself!

I have quite alot of Commissions for magazine work over the next few days but I will try my best to make some cards to post here - Oh, just thought I could post the cards that I did for QVC. Great!

Fab piccis Clare. Our Emma got a Wii fit too, I have found muscles that I didn't know exsisted lol. Been on it every day except yesterday since Christmas morning. OMG I'm so unfit lol. Looking forward to seeing your QVC cards.

Wow you have been busy! I'm really gutted as I missed you on QVC! DOH Looks like you had a wonderful christmas...kids are priceless aren't they! My nephew had his prezzies off his other nanna (who is very strict) and then said "thank you for coming you can go now!" she was there 3 days and had only just arrived! LOL

ROFL at your little boy.....bless him.
Wow..I thought it was only me who got bored!..thank god you're the same...sounds like you had a lovely day though Clare..omg..I don't think I've every been a size 6..lol..lol..maybe when I was 6 years old..lol.
Speak soon
Sharonx

PSML at what Joe said...
Lucky you with your Wii Fit, I must have been naughty as Santa didn't bring me one!!! Lol Oh I love the Wii's they are soo much fun.
Gorgeous pics
Emma x

hi clare..aww..im sorry i missed you on QVC..im gutted.
glad to hear you & your family had a lovely xmas...i can tell your little boy loved it,pmsl at what he said...i i hope you been using your wii fit just keep thinking size 6...lol
anyway just noticed your 12days away from your blogoversary..congrats..so ive given you a little something over on my blog..take a look xx
happy new year hugs clare xx