Oh wow! I really meant to blog last night to reassure you all that I had not succumbed to the after effects of de glittering my room, I really did, but I have honestly not had a minute to come on here to make sure that no one has called the crafting police! I haven't had the squad team burst through the front door shouting "Foam square backs - clear" yet, so I assume that no one got to that stage yet (I think I'm absolutely loosing it - I need to get out and stop breathing in the fumes of my permanent pens I think!).

Only four more cards to go and then I've completed my projects for the march Issue of the Do Crafts Creativity! Magazine. Can I got a Woop Woop!? Don't get me wrong, it's not that I don't enjoy it, I just think that when you have so many projects to complete ( I had 17 for the mag) in so little time, it's such a relief when you know you're going to make it.
Then I have a card to do for Project of the Week (which I like to sing to the music of Harry Hill's TV burp "TV Highlight of the Week") for DO Crafts, and then catalogue my ideas and sketches for the next collection to be included in Clare Curd's Signature Range (Can I just say, I don't take myself seriously when I write that, it seems very strange to have a range with my name on it!)
Next week Sheila and I are travelling down to Dorset to Do Crafts Head Office for a meeting about the Craft Show at Olympia where Sheila is running card making workshops and I will be in the demonstration theatre. The show is running from 19-22nd March, so why not come along and say hello! I also have some Videos of the Week to write and film, and some cards to make too, surprise surprise! I just know that Sheila and I will have an absolute ball, both down in Dorset and at the Olympia. We both work hard and when the going gets tough we just 'Carry On Regardless' and have a laugh whilst doing it! 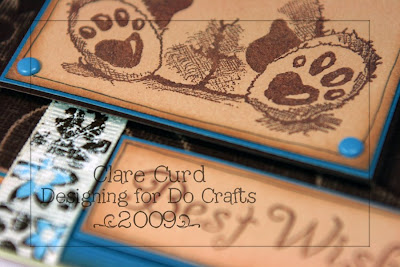 Now, for the sneak for today. This is a card for the March Creativity! Magazine, and again it's using the Daisy and Dandelion Collection created and designed by Erica Martin. This is the stamped image that made me gasp when I lifted the stamp. I just could not believe the detail to the image. It's just gorgeous!
Well, better get back to those last four cards! Lots of love to you all!
Clare x
Posted by Clare on 08:49
Email ThisBlogThis!Share to TwitterShare to FacebookShare to Pinterest
Labels: Cards, Clare Curd's Signature Range, Daisy and Dandelion, olympia show

ok...I'm feelin the stress leaving youas we speak...isn't that shard of light at the end of the tunnel the best sight?
I have to admit....I was getting a bit anxious...thought my blog list was broken...."Clare not updated her blog for this long"....a sure sign of craft police...which had me rofl btw.
Thanks for putting a smile on this face this morning.

Your a daft as a brush Mrs, but we still love ya. now that stamp looks fab and the colour combo is scrummy can't wait to see them. Better get used to seeing your name on your own range cause mes predicts its gonna be huge. Have a good day :)

Can't believe you are taking so long to make those cards......LOL

There is a little something for you on my blog

Haha,you make me laugh!!! Just been reading through your blog & you sound soooo busy!!! :o)x

You've been a bit busy then?
Tired me out just reading!
Looking forward to the next edition of Docrafts.

Thanks for the sneak peek! I can't wait for the March issue!

You're busy, and I'm going to have to go and have a lie down just from reading how much you have to do! Sounds like you're well on the way to the finish line and have a lot to look forward too which is great! The sneaky peak is intriguing. Chris x

hello me lovely!
I'll see you in march .... I'm there toooo!
How much fun!
Loving the look of the card and can see all the detail.

holy cow, 17 cards in one month for a deadline? now that's pressure!

sneak peeks are sooooooooo not fair, I'm itching to see the rest of this stamp that made you gasp!!

wow can't believe you are nearly through your mountain of cards already their must be steam coming from your crafty space lol!!
your blog is fab always makes me smile.....

Sounds like you have been busy. Can't wait to see more than sneaky peeks :) Ooo Olympia, I went last year, not sure I have the cash this year. Mmm going to have to find some from somewhere :) Kim